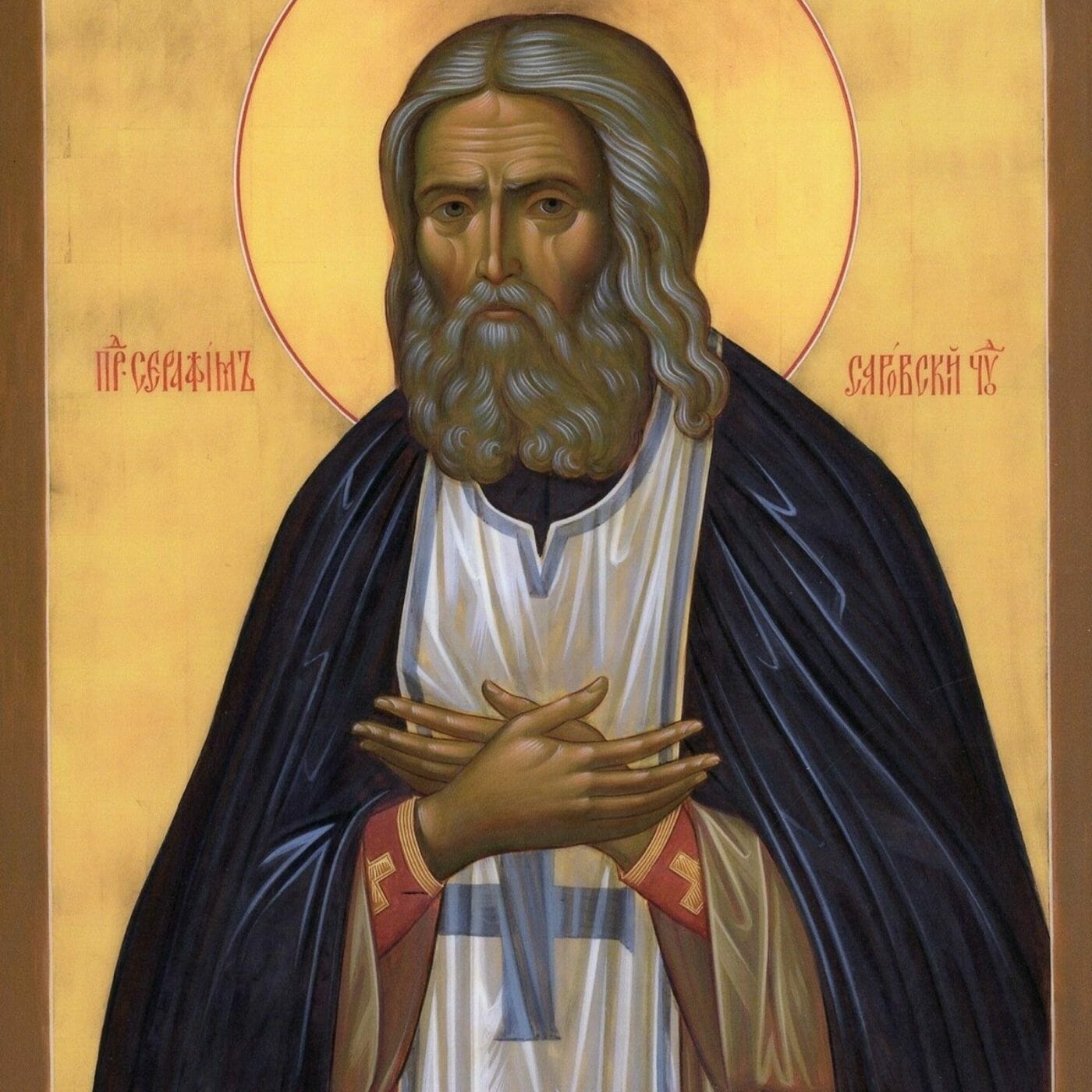 Saint Seraphim was born Prothor Moshnim in 1759 in Kursk, a small town, in Russia.
At 10 years old he became very ill from an unknown disease.

The story says that Our lady appeared in a dream, promising him, he would be cured. After a couple of days, the child recovered.

He confirmed his religious vocation at 18 when he entered the Sarov monastery. There he took vows of abstinence, celibacy, and service.

He got used to isolating himself in a close forest, where he dedicated himself to a life of solitude, contemplation, and prayers.

It didn’t take long, Seraphin fell again ill with an unknown illness. But Our Lady showed herself up again in his dreams, and once more he was miraculously healed.

His religious name “Seraphim” means “Radiant” in Hebrew, and it was his choice because he was known to have the spiritual ability to see and hear the angels, Our lady, and hosts of blessed spirits during the holy masses.

It is said that bestowed by such Visions, Saint Seraphin, lost his voice many times. Once he stayed without speaking for almost 3 years.

After Seven years serving at the monastery, Saint Seraphin retired to a more ascetic life alone in the forest.
It is said that he retired there for 1000 days and 1000 nights,
and after another apparition of Our Lady, he was bestowed the Spiritual gift to see the “Transfiguration of the Holy Spirit”.

He became the spiritual Guardian of his Sarov monastery.

Saint Seraphim died making clear the teaching he followed all his life: “The Holy Spirit must enter the heart. All that we do good for Christ’s sake gives us the presence of the Holy Spirit, but prayer, which is always within our reach, it gives us much more”. The church of Sarov Monastery in the city of Krusk houses his remains.

Saint Seraphim learned how to live in perfect harmony with all the wild animals in the forest. It is said that he had a bear to be one of his Guardians; the one who took care of him and care about him during his mortal life as a monk.

In the life of this amazing saint, it is said that he was served by a bear who had as a “Deaconate” to “serve” the saint’s visitors. Sometimes he would send the bear for some “need”. “Instead of scaring people, Misa, it is better you go and bring me something good….”. The bear would return holding in her front paws a cob of honey”.

b) In the collections of elder Hadzigeorgis, it is said that the Saint Seraphim made the sign of the cross on a wild boar that was destroying his garden, and it remained motionless. He then took it by the ear and closed it in the stable under a “rule”. Three hours later he freed it telling it that if it stepped back, he would receive a double “rule”. So, it happened. 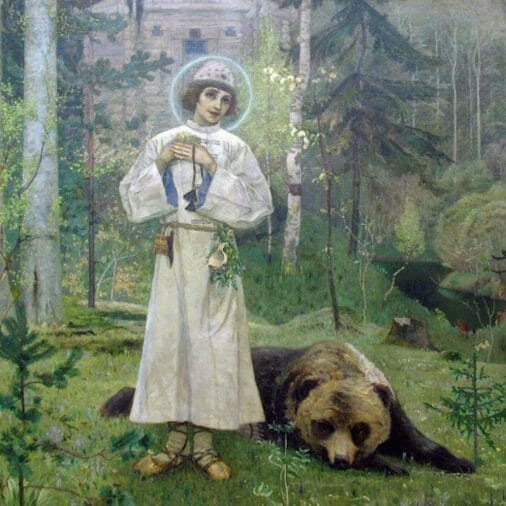 A Story of St Seraphim of Sarov and the Bear

Saint Seraphim of Sarov and the Bear

One day a matron, one of the nuns, saw the venerable Father Seraphim resting on a tree trunk in the company of a bear.
Frightened by the vision, the poor nun let out a scream.

The Staretz (Blessed Saint) turned around and, seeing the poor woman’s fear, he patted the animal and sent him away. The bear disappeared into the dark forest.

Then The saint Invited the nun to come and sit beside him.
‘But’ says the nun: ‘hardly had we sat down when the animal returned from the wood and came and lay at the saint’s feet.

I was as terrified as before, but when I saw Father Seraphim, quite unworried, treating the bear like a lamb, caressing him, and giving him some bread, I calmed down.

I looked at the father and was dazzled by the sight of his face, which seemed to me to be radiant and full of light, like an angel’s face.

When I was entirely reassured the holy man gave me a piece of bread and said:

“You needn’t be the least afraid of him, he won’t hurt you.” So, I held out the bread to the bear and, while he was eating it, it was such joy to be feeding him that I wanted to go on doing so.

Seeing how much I was enjoying it, Father Seraphim said: “You remember the story of St Jerome feed¬ing a lion in the desert?

Well, here we’ve got a bear obeying us.” I exclaimed.

“The sisters would die of fright if they saw such a sight!”
“They won’t see it,” replied the Staretz.
Then, “I’d be very sad if anyone killed him,” I went on.

“Nobody will kill him and nobody except yourself will see him,” answered the father.’ The young nun was already rejoicing at the thought of telling the sisters about it but the Saint, reading her thoughts, said to her, ‘No, my joy, you’re not to tell anyone until eleven years after my death. Then God will show you whom to tell.’

And so it happened: a day came when, some years after the father’s death, the same young nun went past an artist’s studio in the monastery; he was working on a portrait of the father in the forest on a tree trunk. `0h,’ she said, ‘you really must paint the bear!’

What bear?’ asked the artist in surprise. Then the nun told him the story and remembered Staretz’s words. Eleven years had gone by.

Nature living with Animals by Saint Seraphim of Sarov

Drink water from the spring where the horses drink – a horse will never drink bad water.
Extend your bed where the cat sleeps.
Eat fruit that has been touched by a larva.
Naturally, pick the mushroom that the insects land on.
Plant the tree where a marmot burrows.
Build your house where the snake stays to keep warm.
Dig your well where the birds protect themselves from the heat.
Sleep and wake up at the same time birds do – you will reap golden grains every day.
Eat more green – you’ll have strong legs and a tough heart like the forest creatures.
Swim often and you’ll feel on land like the fish in the
Water.
Look at the sky as often as possible and your thoughts will become light and clear.
Be quiet enough, say little – and silence will enter your heart and your spirit will be calm and full of peace.

You May like to Read:
Saint Basil, the Great- Saint of January 2 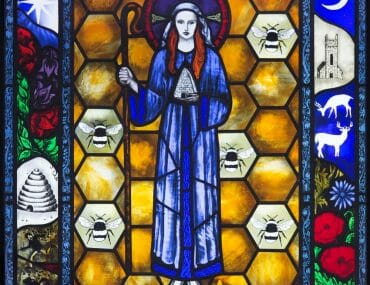 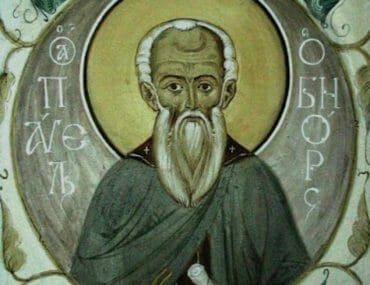