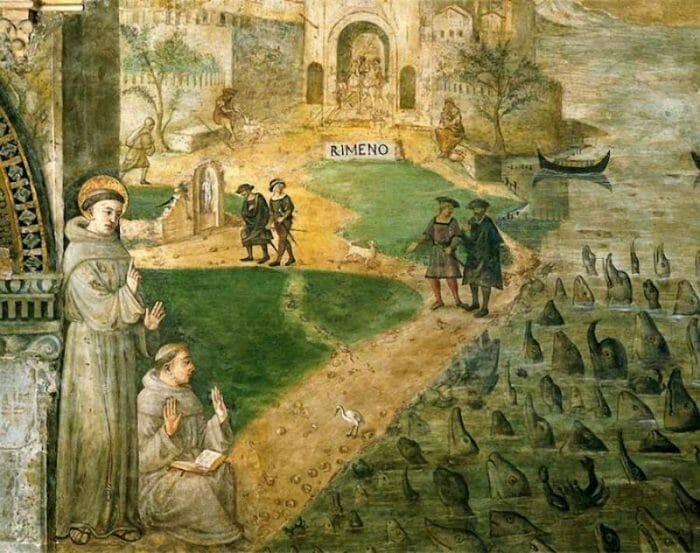 Saint Antony of Padua and the Miracle of the Fish

According to the recorded tradition, the episode in Saint Antony where he preached to the fish took place in the city of Rimini in 1223, a town known as the cradle of heresies, especially of the Cathars. They had the philosophy of denying the divinity of Jesus Christ.

The presence of Saint Anthony bothered them, to which they responded with harsh words.

They disregarded his preaching.

On one of the occasions, Friar Antonio went to the Rio Marechia that flows into the Adriatic Sea to pray. He desired to have a moment of intimacy, reflection, silence, supplication to God, and then leave his interior, began to speak to the fish, and sang praises to God.

The Creation is listening

“Listen to the word of God, you fish of the sea… since heretics don’t want to hear it…
My fish brothers, you owe a great deal, insofar as you are able, to thank your Creator for having given you such a noble element in which to live….salt water.

God has given them many shelters from the storms and food that they can live.”

… “God, your kind and gentle Creator, when he created, you commanded them to grow and multiply.

He gave them his blessing. So then, when the great flood engulfed the whole world and all the other animals were destroyed, God preserved you alone without harm or harm…

…To you, God gave the order to preserve Jonah, who had been thrown into the sea, and after three days, one of you threw him ashore safe and sound.

One of you kept in his mouth the tribute that our Lord Jesus Christ needed, which he, poor and humble, could not pay if you had not given him the coin. You were the food of the eternal King, Christ Jesus, before the Resurrection and again after it…when our Lord…ate fish on the beach with his apostles.

For all these favors, you should praise and bless God who has bestowed so many benefits on you.”

At that moment, Benedetto (one of the heretics) didn’t know where to look.

God’s creatures respond to the Saint

To the beach, where the fickle crowd was beginning to move toward the priest. To the water, which was shimmering with rows of little fish… Or to look at Antonio, whose gaze wandered back and forth over the gentle waves as if he were encouraging rational creatures to praise God.

“Blessed be the eternal God, for fish of the water honor him more than people who deny his doctrine. Irrational animals hear God’s word more readily than faithless mankind.”

…My good people and my dear fish, thank you for listening with your heart. Now return home in peace.”

The waters stirred and bubbled.

When Benedetto wiped his eyes and was able to see again, the surface of the river was covered in circles that quickly widened where thousands of fish had dived beneath the waves.

You may Like to Read:
Saint Antony of Padua, the Thaumaturge 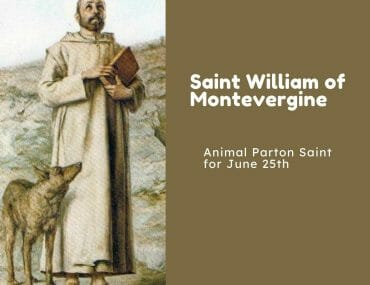 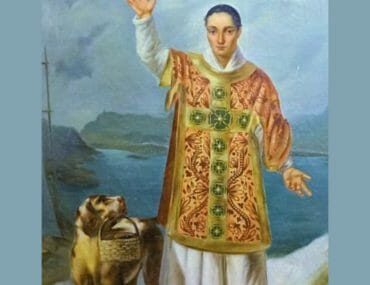